The NBA Substance Report: #7 Out of 30 - D'Angelo Russell

The Substance Report is an official rankings that I thought was necessary to come up with to determine which players throughout the league are most valuable to their team. Each day, for the next 10 days, there will be an article dedicated to a single player that demonstrates both his value to the league, but more importantly, the weight on his shoulders on his own team.

An example of the rhetorical questions to ask yourself throughout the readings of the ranking is something along the lines of, "What would the Warriors look like without Stephen Curry? How much worse off would they be as a team? Could they still win an NBA Championship if they just released him to the depths of a fiery hell? Would Kevin Durant and Klay Thompson's efficiency go up because they would have more shot opportunities with Steph out of the rotation?" and other important meditations similar to that nature.

This is what the rankings look like so far.

30. Lou "Two Girls and They Get Along Like I'm Lou Will" Williams

27. Mike "Never Leaving Memphis Because Cash Rules Everything Around Me C.R.E.A.M.!" Conley

22. Karl-Anthony "Who Was the Last Good Player With Two First Names?" Towns

21. Blake "Pray My Knees Will Be Okay Come April" Griffin

20. Devin "Should I Just Become a Point Guard?" Booker

18. Russell "I Didn't Know a Professional Could Take Their Job Too Seriously / Why Not?" Westbrook

14. Kemba "Can Do Cool Crossovers But May Never Win A Playoff Series" Walker

10. Stephen "How Does The Greatest Shooter Ever Not Have An Actual Usable Nickname Yet? / Chef" Curry

9. LeBron "Will Trade You In a Heartbeat / King" James

8. Rudy "Frenchman Who Looks Like He Can Lay Some Serious Pipe / The Steiffel Tower" Gobert

D'Angelo Russell is the future of the NBA's point guard position.

D'Lo is one of the best players in the world under 23 years old.

He has taken the Brooklyn Nets from the laughing stock of the league to an up-and-coming franchise that makes the New York Knicks look like it's an organization ran by 10 year olds who snort Pixie Stix.

And above all else, he has the best tattoo in the league aside from Malik Monk's XO tat. D'Angelo's "N:OW" tattoo on his left shoulder has single-handedly eliminated all the procrastination that previously existed in my life. 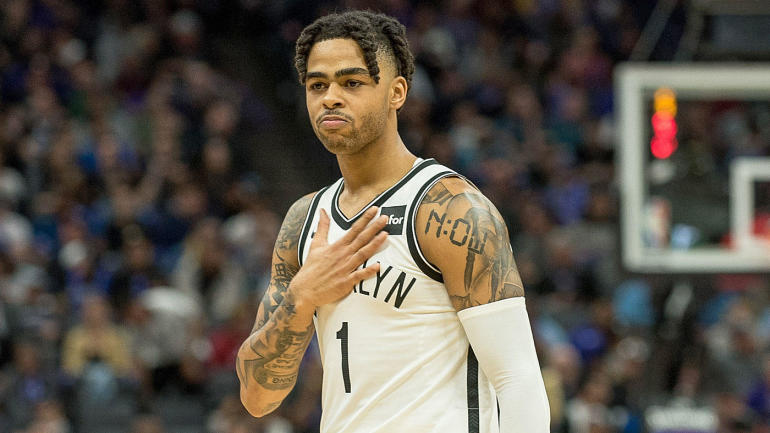 There is not a single soul in the entire league that I would rather rebound balls for for several hours during a pre-game shoot around. I could watch the flick of his wrist as the ball glides through the air on an unimaginable arc for the rest of eternity.

The cool, calm and collected demeanor that Russell carries himself with has breathed an aura of confidence into the entire Brooklyn Nets organization. The young man who was once doubted as a leader, and professional by the Los Angeles Lakers has revolutionized the way the Nets not just think about themselves, but carry themselves as well.

Watch how fucking thrilled, jubilated, and sincerely happy Brooklyn's bench is anytime a three pointer is jacked up and drops through the hoop. There is no bench in the NBA that even comes close to matching the amount of legitimate energy that bursts from the Nets bench each and every game. They are constantly standing, dancing, jiggling, grooving, and oooohing-and-ahhhhing on the sidelines while the other team's bench consistently remains calmly seated, and quietly anxious to check into the game.

Russell is having a career year, and is both Jack Martin and I's pick for the Most Improved Player of the Year Award. Pascal Siakam and De'Aaron Fox are both very deserving players, but without Russell the Nets would be towards the upper echelon of the Zion lottery (all due respect to Spencer Dinwiddie cause that dude can fucking ball too).

In his fourth season since his Freshman Year departure from THE Ohio State University, D'Angelo Russell has blown the fuck up. He's taken the league by storm in the 2018-19 season by improving in every major statistical category, and adding plenty of moves to his arsenal.

His in-between game (mid-range and floaters) has become amongst the best in the league. He can slice through defenders with his tight handle and get to spots on the floor that he's really comfortable at. Check out his highlight reel in the video above. I guarantee that your jaw will bust wide the fuck open.

Every mid-range fadeaway he takes seemingly drops right through the net. Russell is already a step ahead of the defense because his dominant hand is his left, and that always throws defenses off no matter what level the games are played at. Overall, there is no player that I have more confidence in moving forward over the next decade or so to become the next version of James Harden: an unstoppable scorer, and an all-time playmaker.

You could build an entire offense around this guy with deadeye shooters and tenacious rebounders, and that's exactly what the Nets have done. Joe Harris, Caris LaVert, Ed Davis, Jarret Allen, and Spencer Dinwiddie are the perfect complimentary core for Russell's skillset. Dinwiddie can take some of the playmaking responsibility off of D'Lo's shoulders.

Harris can drill wide open, or contested coming-off-of-screen threes. Caris LaVert is a legitimate threat in isolation no matter how much time is left on the shot clock. Allen and Davis are absolute savages when it comes to protecting the rim and crashing the boards.

The Nets formula has proven to be a successful one, and don't be shocked if D'Lo leads them to a first round upset over the heavily favored Philadelphia 76ers.